Windows 11 launch is set to be launch today June 24. Company is hosting a livestream of its Windows 11 event where it is expected to reveil the new  operating system. Windows 11 update will easily get to Windows 10, which was launched in 2015. According to that recent leaked news Windows 11 will come with an absolutely new interface and some exciting animation effects. There will be an updated Start menu that will comes at bottom centre of the screen by default. it also expected to come as a free update to Windows 10, here's something you need to know about the event.

Microsoft is hosting the Windows 11 launch event at8:30pm IST today. It will livestreamed online, and you can watch it live from the official Windows event site. 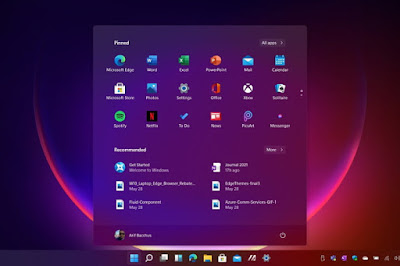 Company has not yet officially confirmed about Windows 11 name, but there company has been teasing as its “new version of Windows” for the last few days. Recently, Company released a video teaser with the startup sound of the new Windows version. That video was 11 minutes in length, indicating the launch of Windows 11.
About features, the according to the leaked news that Windows 11 would come with a fully  redesign  that would begin from its boot screen and the desktop. There would also be the new Start menu at bottom centre. And some of the  interface would may be quite similar to the previous Windows 10X that Microsoft window introduced the dual screen devices in 2019.
This new Windows 11 may have new sounds. You will get multitasking experience through its new split view options, Additionally.
at June 24, 2021
Share